Today is part 1 of a two part series all about 10 Ways to Promote Your Facebook Live Video on Facebook.  I’m all about cross pollination when it comes to social media sites and teasing your live video on Instagram or Snapchat, but I want to focus on how you can promote your Facebook Live videos within the platform.  Join me later this week for the second part of this series all about What to Do AFTER You Go Live. 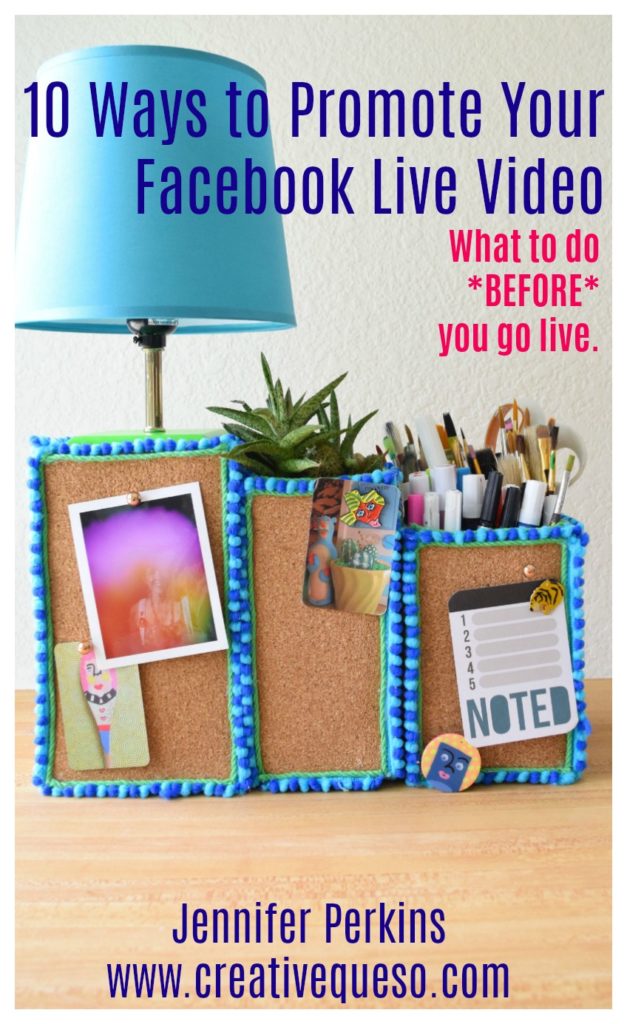 Content is king.  No one is denying that the video is number one and the promotion is second.  Plan it out, know what you are going to say, get your step outs ready – be prepared to educate on whatever topic it is you intend discuss.  However, how do you let the people of Facebook know you will be going live?  How do you get them to be there and get them to engage?  Well after a couple of years going live on my own Facebook page as well as the DIY Network I’ve learned a thing or two about a thing or two. 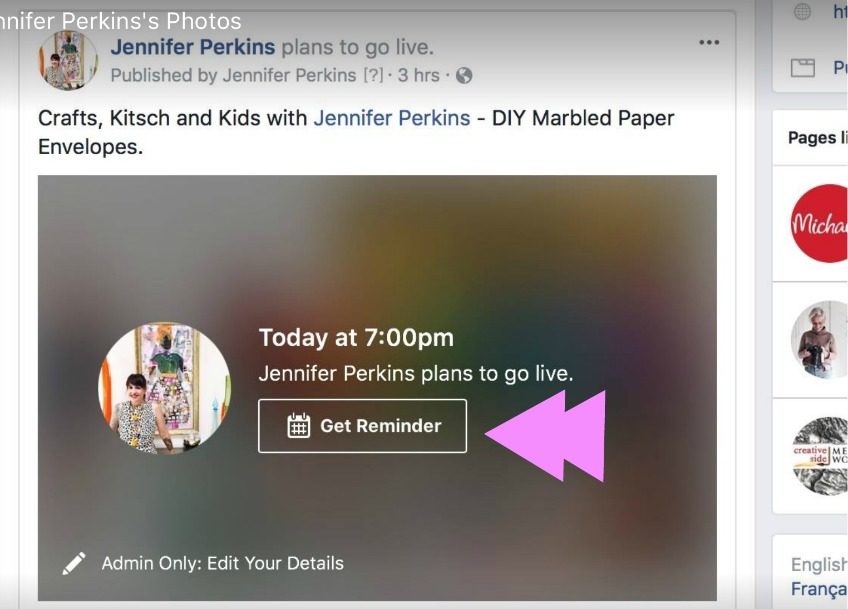 Announce You Will Be Going Live
Le duh.  Tell people it is going to be happening.  There are about 462 different ways you can do this, but we are talking about Facebook.  Did you know you can schedule a Facebook Live reminder if you are broadcasting from your own page?  True story.  This gives people a chance to RSVP and get a reminder when you are actually live.
You can always add a picture to your page the day before the event or the morning of with a teaser picture about your video to build excitement.  If this image gets a lot of interaction be sure to go back in AFTER you are live and add the link to the actual video.

Make It An Event
If your live broadcast is going to be a one time deal or something extra special why not make it an event?  Like as in send out Facebook invites.I wouldn’t do this for a regularly scheduled weekly broadcast, but for something you really want to tell the world about try making it an event.  You could even do giveaways all week long within the event invite to help generate excitement for the broadcast.

Tell a Story
I tend to use Instagram stories much more than I do Facebook stories, which I think is true of most people.  However, Facebook stories is another available promotion tool to use and garner excitement about your upcoming live video.  I tend to post randomly the day of my live video showing my set up process, getting ready, variations on what it is I might be making.  Think of it as an appetizer for the main course.  Wet your viewers appetite with fun snippets to get them excited about the video. 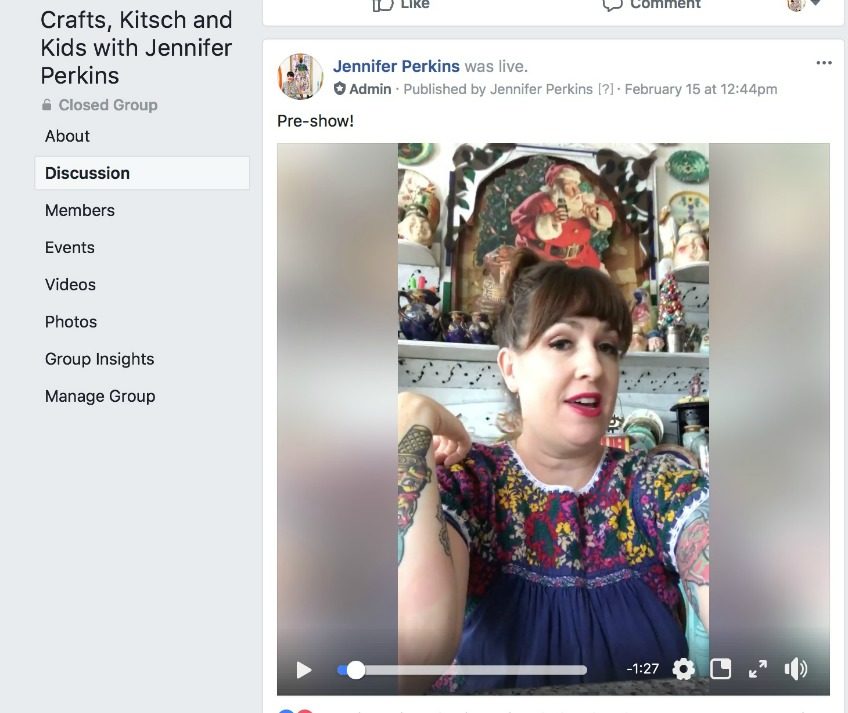 Do a Pre-Show
Ya know how there is the late show and then the late late show and then another show before those shows?  Think of doing a pre-show as the opening act to your “real” broadcast.  I wouldn’t suggest going live back to back on your Facebook page, that would confuse people.  For me each week before my DIY This With Jennifer Perkins video I go live in my Facebook group – Crafts, Kitsch and Kids.  I let members know what the episode will be about, invite them over to watch and sometimes tell them some fun behind the scenes thing about the video you would not give from just watching the live broadcast.  Again this is all a way to entice and remind people about the main course – your LIVE video. 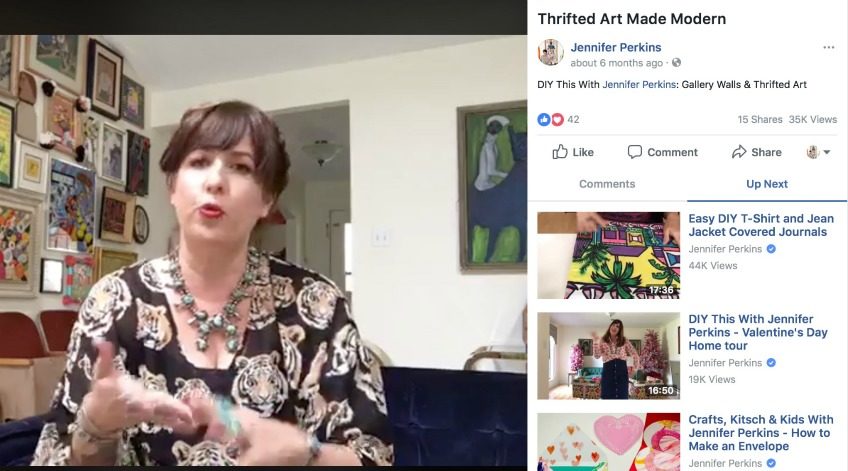 Keep It On the Reg
Take it from my friend Vickie Howell who is a pioneer in this whole Facebook Live series gig, showing up at the same time and place each week is key.  If you loved watching This Is Us but sometimes it was on Tuesday’s at 4pm and the next week it was Wednesday at 10am, you would get confused.  If you plan to make going live on Facebook a regular thing try to pick a time and stick to it.
Have you tried going live on Facebook or Instagram?  How do you promote your videos?
Are you interested in consulting with me further about how you can use Facebook Live for your business? Interested in sponsoring a Facebook Live video?  Let’s Taco About it!

Welcome to Creative Queso with Jennifer Perkins, where we taco about the business of being creative.